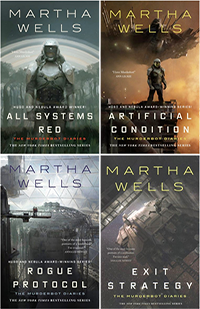 Category: book review
Author: Martha Wells
Genre: science fiction
"As a heartless killing machine, I was a complete failure." In a corporate-dominated spacefaring future, planetary missions must be approved and supplied by the Company. Exploratory teams are accompanied by Company-supplied security androids, for their own safety. But in a society where contracts are awarded to the lowest bidder, safety isn’t a primary concern.

This series of books has been on my TBR list for a while. I have two books yet to read that are not part of the original story arc which follows a robot/clone to becoming a sentient being.

Security Units, or SecUnits, were created as cybernetics to be rented out to provide security by anyone who felt they needed one. The Murderbot Diaries is told from the first person point of view by one of these SecUnits. The protagonist named itself Murderbot after killing a number of people, despite having no memory of the incident. Murderbot has hacked its own systems in order to prevent this kind of thing from happening again. It has become sentient and just wants to binge watch soap operas.

As All Systems Red opens up, Murderbot is saving some humans it was hired to protect. Nothing about the survey mission the humans are on is going right and Murderbot gets stuck helping them find out why. Through the investigation Murderbot ends up admitting to the humans it has basically gone rogue. As the book ends Murderbot has been given limited citizenship on the planet of Preservation, home of the humans it was working for.

In Artificial Condition Murderbot as it travels off Preservation in search of the answer as to why it killed 57 people. It hitchhikes a ride from an unmanned ship after bribing the AI with soap operas. Murderbot finds the answer and stumbles upon why its friends were put in danger in. Illegal activities by a terraforming company, GreySys, come to light. Rogue Protocol continues the investigation into the corrupt GreySys. As the story ends Murderbot learns its favourite human has been kidnapped. Exit Strategy is the rescue mission.

Things are never as easy as they should be for a SecUnit who can hack its way into nearly any system, security and otherwise, and is programed to protect humans. There are feelings and what Murderbot considers bad decisions. The Murderbot Diaries delves into what it means to be human, something Murderbot does not want to be. This is a welcome change from the sentient rogue AI/robot troupe. The rouge robot does not want to kill all the humans (just some of them), and it does not want to be human. It just wants to be itself and do its own thing, which consists of protecting it’s human friends and watching it’s favourite shows.

Martha Wells does a remarkable job in creating a believable character with Murderbot. The wit and sarcasm of the character isn’t forced. The details aren’t overbearing, as they can be in some science fiction. For anyone tired of reading about robot uprisings and wants an AI they can get behind, you can’t go wrong with The Murderbot Diaries.