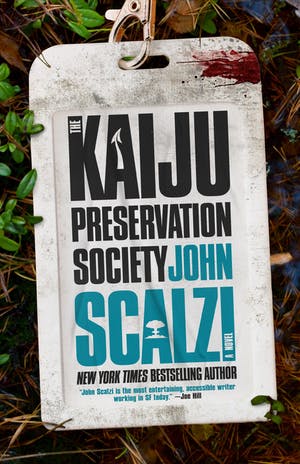 Category: book review
Author: John Scalzi
Genre: science fiction
When COVID-19 sweeps through New York City, Jamie Gray is stuck as a dead-end driver for food delivery apps. That is, until Jamie makes a delivery to an old acquaintance, Tom, who works at what he calls "an animal rights organization." Tom's team needs a last-minute grunt to handle things on their next field visit. Jamie, eager to do anything, immediately signs on...

What is The Kaiju Preservation Society? Think an ASPCA for the likes of Godzilla, Mothra, Gamera, and Rhodan. Not only are kaiju are big enough to stomp the largest cities to rubble in minutes, but they are the apex predator on an alternate Earth. Why would they need preserved and what would they need protected from? An evil corporation, naturally.

Confession time. I don’t trust book reviews. Ironic since I am writing one. I discovered long ago that I tend to like things that are not on the New York Times Best Seller List or recommended by Oprah. Reading is a personal experience, no two people get the same thing out of a book, and not everyone is going to like the same thing. So, I read the 1 star reviews for everything. In my mind, it makes sense.

One of the 1 star reviews for this book claimed Scalzi did not describe anything. This review stayed with me for two reasons. First, this book was totally lost on the reviewer. Second, the person can’t read. That’s probably not fair, but their reading comprehension is highly suspect. The main kaiju of the story is described as having tentacles, wings, and as being H.P. Lovecraft’s panic attack. That’s pretty descriptive to me. I came away thinking this creature would be the love child between Godzilla and Cthulhu.

This is not the kind of book that spends paragraphs describing something. The descriptions are more subtle and it is up to the reader how they are going to be translated. One of the best, in my opinion describes a smell.

“It’s like a family of raccoons hotboxed themselves to death in a dumpster, and someone distilled their fermented remains.”

Scalzi treats his readers as intelligent people that can connect the dots, use deductive reasoning and critical thinking. Not everyone needs, or wants, everything to be spelled out. If you are one of those people that are a sucker for detail, you won’t be happy with this book.

The Kaiju Preservation Society is the B monster movie of novels. The book calls for the same suspension of reality that is needed to watch Godzilla movies. Much like Godzilla, it is a commentary on why we should live in harmony with nature. The Kaiju Preservation Society is about a group of people who take their job as kaiju preservations very seriously. So seriously, in fact, that they are willing to put their lives on the line to save a single kaiju and several thousand acres of Canada. They are willing to stand up to an asshole with a lot of money, and an ego the size of the planet, who  thinks he can do anything he wants. It’s about friendship, standing up to bullies, and preserving life and the environment.