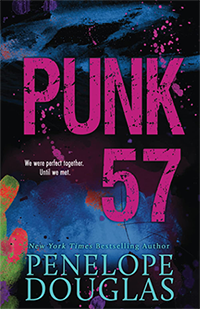 Category: book review
Author: Penelope Douglas
Genre: Romance
"We were perfect together. Until we met."

I didn’t expect this book to stay with me like it has. Granted, I finished it last night. Well…early this morning, but I keep going back and thinking about Misha and Ryen. I picked this book up because people either love it or hate it and I was curious. I wanted to know why it evoked such extreme reactions in people.

I don’t read a lot of romance books, especially contemporary romance. If I am going for a romance book, 99% of the time I pick up something historical. I probably read two of them a year max. I’m just not really that interested in romance stories right out of fantasy land. Yes, I know, people read them as an escape from everything that makes life…life. My Science Fiction literature professor gave us a mini lecture on that today. It’s just a personal taste thing, I’m just not big on romances. I’ll read them, but there is stuff I prefer over them.

There is a lot that is cliché about this book. It is one of those enemies to lovers romance stories with the male leading being this side of an alpha male. Only he’s not the bad boy he is pretending to be. Underneath the surface, this book is really deep. It’s about finding and believing in yourself and the true meaning of friendship. It’s about everyone who has ever felt like an outcast who doesn’t belong. It’s about loss. It is also about how things, especially people, aren’t always how they appear. For those willing to read this book, and I mean really read this book, it has a powerful message and that message is one that a lot of people need to hear.

Both Misha and Ryen are seriously flawed. In different ways they are both bullies. Ryen is the popular high school senior who throws around insults and verbal abuse to be cool to fit in, even if she feels guilty about it later. Misha is Ryen’s bully. He reflects herself back to her and sends her soul searching. Worse, behaves like the typical entitled alpha male who has taken possession of a woman. While this is nauseating, these kind of characters are only as entitled as women allow them to be. I have to remind myself that Ryen doesn’t have a problem with his attitude, so I shouldn’t either. Meanwhile, my rational brain tells me this would be an awesome book to dissect and rip apart for a Women and Gender Studies class. Misha calls Ryen out on her attitude and behaviour at every turn and makes her face up to the kind of person she’s become. She pushes back and their fighting turns into a form of verbal foreplay. Misha is holding secrets and when they come out, it turns Ryen’s world upside down. In the end, they bring out the best in each other and both characters are redeemed and have their happy ever after.

Those that hate this book are really hard on Misha and how he acts so entitled. Maybe he deserves it, maybe he doesn’t. Everyone gets something different from a book. I am not going to tell anyone how to feel about him or how to interpret his character because he is complex. He has his motives and while they might not always be right, seeing things from his point of view helps the reader to understand him. What I am going to do is bring up Trey. I have not seen a single thing written about how problematic Trey is. He’s the popular football player who can have any girl he wants, and he takes advantage of it. He abuses his place of power in so many ways and is the poster child for toxic masculinity.  He gets away with everything in part because his step-mother is the principle of the high school. Speaking of the principal, I’ve also not seen anyone question her abilities as a principal to keep a problem student under control or parent her step-son. She’s really a piece of work. To say any more about either of them is to give away spoilers.

Overall, I think this book is worth reading. Penelope Douglas has created some complex and complicated characters who have even more complicated relationships with both themselves and other people.