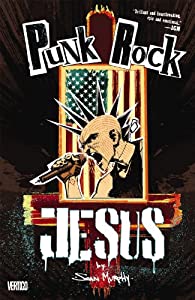 If someone asked me to name two things that didn’t go together I would say punk music and Jesus. Naturally Punk Rock Jesus caught my attention. Put on by Vertigo Comics, the same company that originally brought us Sandman by Neil Gaiman, the Punk Rock Jesus graphic novel is the compilation of a 6 issue comic series.

A reality TV show starring a clone of Jesus Christ causes chaos across the U.S. of the near future.

I am going to do this review a little differently because this one is hard to talk about.

Slate: Reality TV executive/producer. His motivation for everything is money and ratings. He is behind the reality TV show, J2 which follows the life of the clone of Jesus Christ and his mother, a teenage virgin. The story is, 2200 year old DNA was extracted from the Shroud Turin and was used to impregnant a virgin spawning the second coming. Needless to say, he is manipulatives not only the show, but everyone who works for him.

Gwen: The teenage girl chosen to carry the clone of Jesus. She was the stereotypical ‘girl next door’ until J2.

Sarah: The scientist employed to both serve as doctor and caregiver to Gwen and her child through the run of J2. Despite selling her soul to Slate in order to obtain funding for her research, she is the moral backbone of the story. Every time she stands up to Slate, her research is threatened.

Chris: The clone of Jesus Christ. He is raised, or maybe indoctrinated is a better word, to believe he is the second coming. Gwen wants him to be a normal child but Slate won’t allow it. When Gwen is kicked off the show, things spiral out of control. He goes from being the second coming to being the lead singer of a punk band with an anti-religious message.

Thomas: Thomas serves as Chris and Gwen’s bodyguard. He’s too good at his job. Thomas is a complicated character with a tragic and twisted backstory that shapes every decision he makes. He genuinely believes that Gwen is a reincarnation of Mary and Chris is Jesus Christ.

Tim: Tim is a minor character and serves as the tech guy behind everything at J2. He works with Thomas and they become odd allies.

Rebekah: Sarah’s daughter who grows up with Chris.

If you are going to create a clone of Jesus Christ, you have to expect the religious zealots to come out of the woodwork…and they do. People either love Chris and believe he is Jesus reincarnated or they consider the entire stunt blasphemy. Chris considers himself the “bastard child of the entertainment industry” and it doesn’t matter who he is or isn’t. Meanwhile, the scientific community is worried about the implications of cloning a human being.

He has lived his entire life on television for the entertainment of others. Kept on an island compound for his own safety, he has seen what happens when religion brings out the worst in people, and takes it upon himself to preach against it through punk music.

Published in 2013, Punk Rock Jesus is still relevant today. This is the story of how entertainment, especially the voyeurism of reality TV, has taken over our lives and changed it for the worst. It is the story of what happens when religion creates zealots and how those zealots forcefully alter our lives when left to run amok. This is a dark story that provides a different take on the battle of good and evil. It is also the story of one man’s redemption.