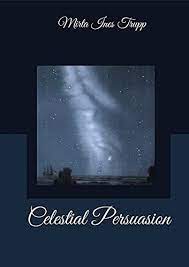 As I was reading Celestial Persuasion I kept thinking that it read like a classic that I would read in English class. It seriously has that feel to it, that it was written in another time. At the end of the book is an author’s note that explains it is Jane Austin fanfiction. Mirta Ines Trupp created characters that could easily be part of the social circle of those from Persuasion.

This is where I admit that I probably should have my English degree rescinded because I have never read Jane Austin. I found a rather thick volume that contains all her works at Coscto. It is written in ant font and will be a horribly miserable to read with my shite vision. I bought a book magnifying glass to read it. My goal was to read it before classes started in the fall. We will see if that happens. I digress.

Since I have not read Persuasion I can not comment on how well the author follows Austin’s style. No matter. This book is beautiful. It really is. Or I could just be a weirdo English major that loves this kind of stuff.

Let’s start with the book blurb…

Abigail Isaacs fears ever again falling under the power of love and dedicates her life to studying the heavens. However, upon her father’s demise she finds herself in reduced circumstances and must write to her brother, who has long been away at sea. When instead Captain Wentworth of the HMS Laconia sends a tragic reply, Abigail is asked to set aside her own ambitions and fulfill her brother’s dreams in the Viceroyalty of Río de la Plata.

In his relentless pursuit for justice, Lieutenant Raphael Gabay lends his sword to the Spanish American cause. But as he prepares to set sail with the others, he is entrusted with the care of a young woman. She is quite unlike anyone he has ever known, and Raphael begins to wonder whether the brilliant astronomer will see beyond his frivolous façade and recognize his true nature.

Their destinies have been plotted beyond the celestial veil; their charts foretell of adventure. Can these two troubled souls be persuaded to heed the stars and find love—and their purpose—in this fledgling nation?

The blurb makes the book sound like more of a love story that it is. Through most of the book Raphael is suffering from Abigail’s unrequited love. Abigail, at 27, is resigned to be a bluestocking for rest of her life while she peruses academic endeavors. In fact, she puts her academic endeavors above everything else and starts to loose sight of who she is and what she wants while fulfilling the wish of her brother. To this end, much of the story is told through correspondences between Abigail and Captain Wentworth (from Austin’s Persuasion). However, the book is about family, loss, immigration, and the search for self.

Trupp needs to be commended for her historical accuracy and the portrayal of Jewish culture. Both are superbly done. The characters, including the side characters, are likeable and the story amazing. The writing style really does capture the style and nuance of how books were written in Austin’s time. I actually want to start Persuasion now to find out how things work out for Wentworth.

Despite having never read Austin, I am going to go out on a limb and say that this is a must read for Jane Austin fans and fans of that kind of writing and storytelling. I think everyone else will enjoy it too.