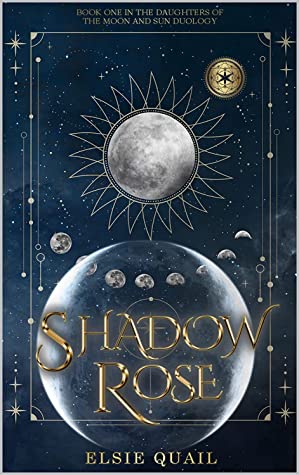 Shadow Rose is the tale of what happens when the lives of mortals get mixed up in the lives of the gods. This remarkable fantasy is the debut work of Elsie Quail. While the writing feels slightly off in some spots, it doesn’t take away from story. I didn’t take away stars in my rating for two reasons. First, it is entirely possible that what I felt was off was just my English major brain nitpicking. Second, Quail made me cry multiple times. The way she conveys emotion will tear your heart out. My biggest complaint is the follow up to this book is not out yet.

Maeva is the offspring of a human and daemon raised among humans but accepted by only a few. The man who took her in when her family discarded her died when she was 10 leaving her on her own. Her only companion was a shapeshifting eagle. She would soon befriend Kiel, loyal to a fault and always quick with a joke, and Ophelia, and unwanted princess.

Ophelia’s mother disappeared the day her brother drowned. That was the day her father started his downward spiral into madness. When she realized he was hiding something, she set out to find out what it was. What she learned changes her life, and her friends lives, forever. They set off on a quest to right wrongs and fulfill a prophesy. Along the way they learn a lot about themselves and each other.

In many ways this is a coming of age story. It is a story about love, loss, and the family one chooses for themselves. It’s also about self doubt and facing our own personal demons. Maeva, Kiel, and Ophelia’s lives are entangled more deeply than they could ever imagine. Part of me feel like it’s a bit too convoluted, but at the same time I feel like this is the kind of thing that happens when you live in a certain kind of small town.

The book ends on a bit of a cliffhanger, and there are a few unanswered questions I hope are addressed in the next book. In short, I can see Elsie Quail’s name being added to the list of popular fantasy writers.