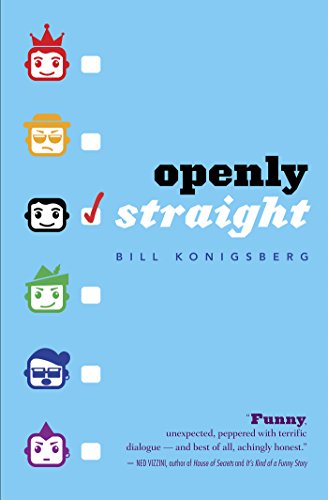 I have an annoyance I need to get out of the way before I start this review. Several sites list this as a children’s book. Surprised the book banning police haven’t come for it screaming, “Not suitable for age group!” This is a YA book. Genres can be fuzzy much like music genres, but age groups, not so much. The Adventures of Winnie the Pooh is a children’s book. A book about a gay teenager is a YA book. Come on people, get it together.

Openly Straight follows Rafe to an all boys boarding school where he hopes to shed his label as “the gay guy”. Rafe lives in a progressive town with accepting parents who have been nothing but supportive. For him it’s not about being gay, it’s about the label. He is only seen as his label, not as himself. He just wants people to accept him for who he is, not what he is. Rafe thinks a boarding school across the country is going to fix this.

He arrives and is invited to play touch football with the jocks. Something that has never happened before. It’s acceptance without labels. He lets everyone assume he is straight and goes along with it. He quickly realizes he has more in common with his weird roommate and his weird roommate’s best friend. Then there is Ben, the quite jock who doesn’t quite fit. Ben is on his own journey to figure out who he is. His best friend has gone home after a mental health crisis and his family, and he doesn’t quite fit in at home. Ben is, in short, the model introvert.

It takes Rafe’s worlds – who Rafe is at school vs. who Rafe is at home – for him to realize who and what he is, how he really feels about labels, and what he wants in his friends. Openly Straight is a touching coming of age story about Rafe, a character Konigsburg states is roughly based on himself.

This is an amazing coming of age story. I tried to start the companion book, Honestly Ben, right after and it was a hard transition. Both books are written in first person with different voices. That one is on me.