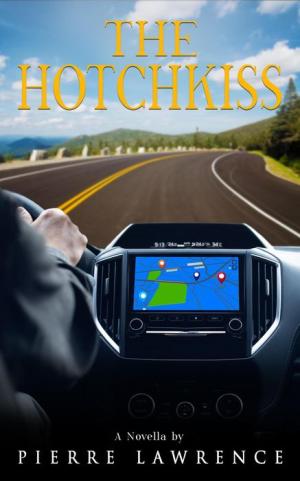 A novella in the Science Fiction/Fantasy genre, it’s an over the top, tongue in cheek tale about a malevolent GPS (the Hotchkiss) that assists a hen-pecked husband dispose of his nagging wife.

This description is on the vague side. Also, how malevolent can a GPS system really be? I don’t know what I was expecting from this story, but whatever it was, I got something entirely different. In the world of plot twists, I never seen the on in The Hotchkiss coming.

The main character, Charles, has a personality that is lacking. He has been married to his wife, Alice, for 35 years and they are getting ready for an anniversary get-a-way. In order to appease his nagging wife and help smooth over problems in his marriage, he invests in a GPS system. How will a GPS system fix things? Charles is one of those guys who will not ask for directions, followed an outdated map, and had them arrive 30 minutes late to an anniversary dinner with friends. A GPS will ensure they won’t get lost on their vacation.

Charles decided he didn’t want the basic model designed to get one from Point A to Point B. He had to have the one with all the extra features. Let’s just say some of those features – okay, most of those features – are over the top. Like way over the top. The Hotchkiss turns the average car into the love child of K.I.T.T. and James Bond’s Aston Martin DB5 with added DNA from Inspector Gadget’s Gadgetmobile.

Pierre Lawrence has created a remarkable novella with amazing writing. I can see this novella being adapted for The Twilight Zone, if it were still on TV. The story is original and unexpected. I was originally a little put off by all the descriptions and details, wondering if they were really necessary, but those details serve a purpose. I can’t recommend The Hotchkiss enough