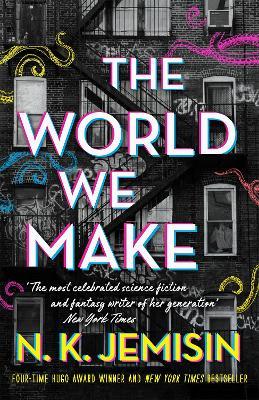 The World We Make is just as good as The City We Became. There is nothing worse than a sequal that doesn’t live up to the original. Jemisin didn’t let us down and created another remarkable book. As an aside, it is totally worth reading the authors note at the end of the book.

I’ve read a number of things this year that have made me laugh. John Scalzi’s description of kaiju phermones was pretty epic, and I laughed way harder than I should have. Jemisin has that kind of descriptive gem as well. Please don’t make me pick a favourite between the two.

…and R’lyeh’s foot monsters are suddenly met by an equally vast flood of – oh, God, rats and and pigeons and cockroaches, and pigeons carrying rats holding cockroaches! She’s never seen anything so nasty, and she’s a Lovecraftian horror.

Somehow I feel this could happen in Baltimore. Baltimore has some pretty large pigeons who have grown fat on french fries to the point they can’t fly. I’m just saying they could probably carry around the rather large rats I’ve seen there. I mistook one for a small dog once…

That’s a story for another time. Let’s get back to Jemisin’s New York. A new cast of secondary characters are introduced. These are the avatars of other cities and they are just as vibrant, as the cities they represent. There are some unexpected twists and turns, lots of character developement and growth, and just an amazing story. Ultimatly this is the story of making ones own choices and finding ones place in the world, and how family is sometimes the people we choose rather than those tied to us by our DNA. Jemisin wrote The World We Make during the pandemic and so it reflects our world a bit more than the first. This was an element of the book that I really enjoyed. How our culture is reflected in literature, and how literature reflects it back to us is what I have chosen to study for my English MA.

N. K. Jemisin is an amazing and talented writer and I’m really looking forward to reading her other works. The City We Became and The World We Make has put her on my favorite author list right next to Neil Gaiman.