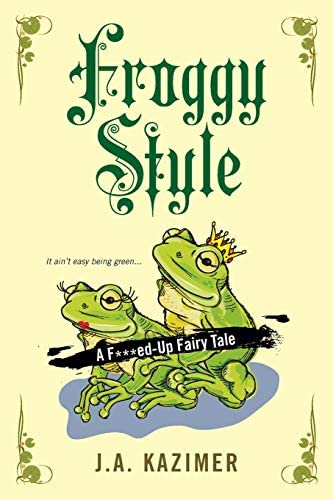 For anyone who liked the concept of Shrek, that throwing together of all the fairy tale characters in one spot and following their lives, Froggy Style is a must read.

Froggy Style is the story of The Frog Prince going in search of The One. You know, The One that will keep him from being a frog for the rest of his life. He was a frog of about eight, and hanging out on his lily pad, doing frog things, when a little princes came along and shoved him in her mouth. The rules of his curse weren’t entire clear on what kind of kiss had to happen, so being stuffed in someone’s mouth counted. He turned back into a prince. Now he has until his fast approaching 30th birthday to marry the girl that saved him from being a frog or he will turn back into a frog. There are a few problems.

It seems like there is a lot going on, but it all weaves together coherently. There is a reason the tagline is “A Fucked Up Fairy Tale”. Things are just a mess as The Frog Prince’s happily ever after is in serious danger.

Sometimes you just need brain candy to amuse yourself. Not every book has to be deep or require some kind of analysis to understand or even make you think. Sometimes a fun book is in order. This is that fun book.