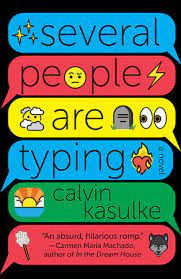 Gerald works for a pubic relations company who is currently running damage control for a dogfood company after the death of several Pomeranians. The problem is, there has been a rather large technical glitch. Gerald’s conscious has been transferred into the company’s Slack server. His co-workers are convinced he is pulling an office prank in order to exploit the company’s work from home policy. While Gerald’s productivity has more than doubled, his main goal is to be reunited with his body. In order to do this, he enlists the help of Pradeep, the same co-worker who auctioned off Gerald’s desk to the highest bidder. After all, Gerald has the best desk in the office. Meanwhile the CEO’s only concern is someone messing with his office desk. He is convinced it is the cleaning crew and employs some unique tactics to stop it. There are a few plot twists and turns, an inter-office romance or two, absurdity, satire, and a lot of unexplained howling found between the pages of Several People are Typing.

Calvin Kasulke has created a unique book that serves as commentary on both work culture and our online lives. While stories about PR people have been done before, none have been done through the strings of texts, emojis, and gifs found in a company Slack server.

I wasn’t sure what to expect from this book when I realized it was told through Slack messaging. I missed that part of the blurb on the back of the book. It was a brilliant choice of format that makes the reader feel like they are spying on the entire PR firm. The format isn’t going to be for everyone, but it is what really makes this book.