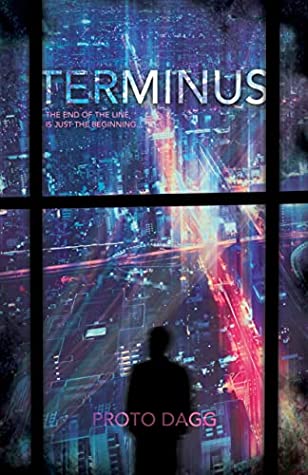 Terminus is a debut novel by Proto Dagg. Proto Dagg is obviously a pen name and not much is known about them. This makes the story a bit more interesting because of that anonymity. I did find an interview with them here that is rather interesting. I have never known an author to write something without the standard biography blurb found at the back of all books.

Terminus is a city divided by class in the aftermath of its gang wars. The rich live in the green zone while the red zone is controlled by gangs and everyone else in the yellow zone. A drug lord known as The Warlord controls the city through addiction to a drug known as Power. A new player comes on the scene known as The Peacemaker with Peace, a drug that can cure addiction to Power. Matt is an out of work ad campaign manager. No one will hire him since the last big campaign he worked on inadvertently caused someone’s death. He’s living in the green zone in a condo he can’t afford with his best friend footing the bill. Matt soon finds himself in the middle of the drug war for control of the city’s soul. This is very much a biopunk novel, but it has a cyberpunk city setting, complete with the greedy CEO who wants to find a way to cash in on the drug war.

Two themes of Terminus are drug addiction and spiritual awakening through hallucinogens. These two things are both contradictory and complementary. To say any more would be to give away spoilers. Dagg has a solid understanding hallucinogens and coupled them with the search for self through drug use.

The drug war serves as an allegory for our society. Our society is one that is always on the go. We work long hours, and may even have a side hustle, either to get to the top or make ends meet. The corporate rat race has engulfed our lives all because of the want, or need, for money. Wealth is synonymous with power. We don’t know how to just live in the moment anymore. Our society isn’t one that respects mental health days and self care. We are rarely at peace, stopping to sniff the flowers and live in the moment. Power and peace will always be at odds.

This is easily one of the best books I have read this year, and probably one of my top 10 books of all time, if I actually kept such a list. I am a huge fan of speculative fiction movies from the 80’s like Demolition Man and Freejack. Terminus has the same feel to it. The book kept me on the edge of my seat. There was so much about the plot I didn’t see coming. I am looking forward to see what else Proto Dagg does. There is rumor of a sequel…