Hi Victor. Thanks for the interview.

I have to say I just had a laugh going through your older Instagram pages. You posted two pieces of literary advice at the start of the pandemic. “Don’t panic” and “Fear is the mindkiller. Fear is the little death that brings total obliteration. I will face my fear. I will permit it to pass over me…” This is great advice. I recently sent a friend who was having a panic attack over an upcoming medical procedure the quote on fear and told them to memorize it. How much science fiction do you read and what kind of influence has it had on you and your own writing? I read quite a lot. My mom got me hooked at an early age. She was a big fan of Robert Heinlein and Star Trek. As a young boy, I devoured superhero comics and classic stories like The Time Machine and The Invisible Man by HG Wells and 20,000 Leagues under the Sea by Jules Verne. So the fuse was lit early. I love SF and mysteries and fantasy novels, and that makes up about 80% of the books I read.

Since we are on the topic, who are some authors that have influenced you? There have been so many! When I was a teenager, my favorite writers were Kurt Vonnegut and Harlan Ellison. I loved Ellison’s prose style and the passion you could feel in each story. And reading Kurt Vonnegut was a revelation. It was the first time I thought that maybe I could do this. Now, as any fan of Vonnegut will tell you, his writing is deceptively simple and many an author has been tripped up trying to ape his style. But it was still inspiring!

In terms of this series though, I feel like a lot of the tone was influenced by some of my favorite Florida crime writers – like Carl Hiaasen and Elmore Leonard. Leonard is a master of dialogue and Hiaasen can find great ways to make absurd situations feel plausible, while still keeping them funny. That was a big part of the tone I was going for in the first book, while adding in the witches and magic bulldog.

Why did you choose to write fantasy adventure over science fiction? I got the idea for this story when I was stuck in traffic near Myrtle Beach with an overheating car – much like at the start of Tail & Trouble. The thermostat kept creeping up as we crawled along and I thought that it would be so cool to have some magical way to get the traffic to go away, and everything kind of clicked into place. So based on that, it was important to have a magical element in the story.

I am working (slowly) on a science fiction novel, with a disgraced former hyperspace pilot who plots revenge against her old employer. It’s also a heist story, which is another genre I am a big fan of. 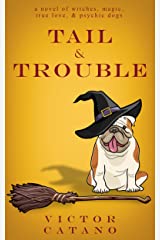 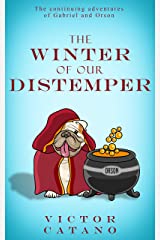 I love the titles of your books. Tail and Trouble makes me think of Macbeth while The Winter of our Distemper rings of Steinbeck. Was this intentional?In a word, yes. The working title of the first book was just “Gabriel and Orson,” and my publisher didn’t think that was catchy enough. So we brainstormed a bunch of titles. I dug out the old email chain, and wow, were there some odd ones on there – Bewoofed, Mad Dogs & Sorcerers, Doggone Magic, Wag the Witch. Finally, we kind of agreed on Tail & Trouble by default. And it really grew on me! To the point where I was eager to do a Shakespeare-based pun for the second book. Winter of our Distemper came to me right away, since the tone is a little darker and it takes place in the winter.

Tell us a bit about this series? How many books do you think there will be? I’m not sure! I took a bit of an unintended break during the pandemic. I had every intention of writing all the way through and coming out of this with three more novels, but I just found it impossible to focus on anything longer than a tweet. We live in Manhattan, which was the epicenter of the first wave of Covid in America. I was furloughed for the first few months, and then I was just kind of in a daze of anxiety.

But, I did have the germ of an idea for a third book, and the working title is taken from King Lear – Sound and Furry. So, hopefully, I can get into that soon.

Did your own dog serve as inspiration for Orson? Yes, actually. Just like in the book, it was my wife’s dog. When we met, she had a cocker spaniel named Ollie. And my wife knew I was okay when he took a liking to me. My wife would swear that Ollie had magical powers. Food would just fall off the table right in front of him when he was hungry (which was always) So that was a partial inspiration. Ollie passed away over a decade ago, and this was a nice way to keep a little spark of his memory alive.

Let me ask you about Across the Board. This is a blogging website with several authors on it, including yourself. Did you put this site together or were you invited to blog there? I was invited. I knew some of the other authors through our shared publisher, Red Adept Publishing. Two of my friends from that site – Mary Fan and Karissa Laurel – did a live tweet marathon of all the Star Wars movies with me back in May 2020. (Mainly because I was bored and unemployed and I bugged them to do it.) They wrote up the experience as a blog post with me as a guest author, and then would periodically invite me back to talk about other things – like The Last Airbender and the Snyder Cut of Justice League. When a spot opened up on the blogging roster, they asked me to join. It’s been a lot of fun, talking about whatever topic pops into my head that month. I’ve written about Stephen Sondheim, the new Law & Order reboot, and did a photo essay about our current dog, Danerys. (Check it out, Dany is a cute little ham.)

Is this just a random group of authors, or is there something that connects all their writing? It’s a pretty wide ranging group. I’m not exactly sure how it started, but many of us share a publisher. We are mainly SF, fantasy and horror authors, but we’ve had contributors from all genres.

When you aren’t writing you are working backstage in live theater. What is that like? How did you get involved in that? I’ve been working on stages since I was in elementary school. I was in all the school plays as a kid, and then I gravitated to working on the run crew backstage. I liked being in charge of things, and I got extremely self-conscious as a teenager (imagine that!). I love working as a stage manager and seeing a whole lot of different shows every week as a production manager at the arts center I work at.

You have such a creative life, in some ways. Did you ever envision yourself either writing or doing the thing that you do for theater productions?  Do you find that these things complement each other in some way? Well, I love doing both those things. If I ever won the Powerball, I’d still want to work on shows. I’d probably be producing new plays and casting my wife in them, but I still enjoy doing creative work.

Finally, what are you currently reading? I just finished reading Legends & Lattes by Travis Baldree, which is a delightful cozy fantasy. It’s about an orc who is tired of being a barbarian for hire, so she takes her earnings and opens up a coffee shop. It’s a wonderfully charming comfort read. I also read Neil Gaiman’s graphic novel Snow, Glass, Apples,  which is a dark retelling of the Snow White story from the Queen’s point of view with absolutely gorgeous art by Colleen Doran.

Currently, I just started A Master of Djinn, by P. Djeli Clark, a steampunky mystery set in Cairo in the early 1900s, in an Egypt where magic has been harnessed. It’s a very atmospheric read and also has an intriguing plot.

Thank you for your time.

Tail and Trouble and The Winter of our Distemper are available on Amazon.