Arguing with Idiots on the Internet

We all know we shouldn’t argue with idiots on the internet and yet, we all have those moments when we do it. Someone posts Evsomething that just pisses us off. We know we should walk away, but we don’t. We throw our opinion into the fray and everything goes downhill.

I do this way more than I should. It’s always when some conservative has something to say about queer people. I can’t reach through the computer screen and punch people in the face for being homophobic/transphobic assholes so verbal warfare it is. Maybe ‘verbal warfare’ is too strong of a phrase. I try to be polite, rational, and logical. I did graduate Cum Lande with a double major in English and Religious Studies and missed getting a Social Justice minor on a technicality. I do know how to think critically, make an arguement and back it up. I’ve gotten pretty good at this over the years. What I really want to do is tell people to get their head out of thier asses and stop being queerphobic a-holes, but I refrain.

Brían Nguyen recently won the Miss Greater Darby pagent, a local Miss America pagent, that I believe that puts them in the state competition for the title of Miss New Hampshire. I’m am not sure on how the Miss America competition hiearchy works, so don’t quote me on that. The important thing is Brían Nguyen won. Brían, pronounced Bree-ann, is the first transgender contestant.

When I read the news article on Brían I had to check out her instagram page to learn more about her. This is a huge thing for a number of reasons

Of course, haters going to hate. It’s what they do.

There is so much vitrol in the comments of Brían’s pictures. I should know by now not to read the comments on anything. That was my first mistake. I am blown away by the things that people think it’s okay to say to a total stranger on the internet. I guess sitting behind a computer screen makes people “brave” or something. I don’t understand why people think it’s okay to say hateful things to strangers they don’t know because that person is in someway dfferent.

“Do not judge, or you too will be judged. For in the same way you judge others, you will be judged, and with the measure you use, it will be measured to you.

That’s in red in my copy of the Bible. That means Jesus said it. Christians obviously can not follow the teachings of Jesus. I mean, this didn’t make the Big 10™ but it is something Christians like to point out, especially when they are the ones being judged.

The Bible says nothing about being queer or transgender. Nothing. Nada. For those of you who want to throw Leviticus let me let you in on something (remember, I have a degree in religious studies). First, there are some biblical scholars that believe this was added years after the fact, that it wasn’t in the original version of Leviticus. Second, If we go to the original Hebrew and with a Hebrew linguist, we find out that this has nothing to do with gay sex, but everyting to do with pederasty. Third, if people want to be pendantic, the religious definition of sex has to do with penetration. As long as there is no penetration there is no religious arguement that stands up against queer relationships. Everyone just assumes that gay men have anal sex. There are plenty of gay men out there who aren’t into that.

At any rate, the word ‘homosexual’ was first used in 1868. What we call homosexuality today was not a thing back in biblical times. This is what English scholars call ‘presentism’, or applying todays standards to something historical, rather than looking at norms of the time and place something was written or happened. Everyone does it to some extent or other because we judge the world based on our life experience. The problem is presentism changes the meaning of historical events. The term transgender was first used in 1993. Again, not something discused in biblical times. All of this “Jesus/God is against queers” is humans reading into what the Bible says, interperting it in a way that fits their own narrative.

No two people read the same book. We all take something different away from everything we read. It’s why book clubs and college English literature classes are so intersting. A group of people get to sit around and debate the meaning of a book or a passage. There are 250,000 denominations of Christianty. That means 250,000 groups of people have different interperations of the Bible. At the end of the day that means no one is right or wrong. They have an opinion that is not based in fact.

And yet, there are way too many people telling Brían Nguyen that they are a guy, that they are mentally ill, that they are wrong, that men can’t be women, that they are stealing a woman’s oppertunity, and the list goes on. Stealing implies taking it from someone else. Brían didn’t take anything from anyone, they competed with a group of young women who had the same opportunity to compete, and won. Naturally there are those that claim the contest was “rigged by wokeness”.

Obviously these people do not believe in accpeting others for who and what they are and letting people just be who they are.

I am beyond tired of the anti-trans and anti-queer rhetoric spewed out of the mouth of conservatives. Trans women are not threatening my place in the world. Trans women are not diminishing my experiences. Even without trans women in the world I would still be the victim of sexism and misogyny; I would still be discriminated against because of my gender. My gender does not give me any kind of privledge that is being threatened or taken away from me by someone else.

I don’t understand this thought process.

Naturally, I had to engage with the riff raff on Brían’s instagram page, because I obviously hate myself and enjoy abuse. It’s all I got. I have been told that my view of the world is wrong, that being gay and/or transgender is taught and is also a psychological disorder and that I have been indoctornated.

“We are the Borg. Lower your shields and surrender your ships. We will add your biological and technological distinctiveness to our own. Your culture will adapt to service us. Resistance is futile!”

One of the responses I got because I really can’t make this stuff up. 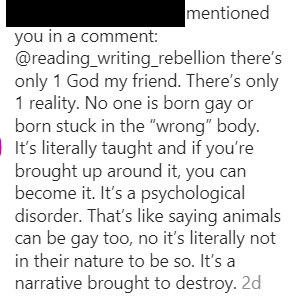 I’m glad that someone corrected a huge misconception I had that mental illness was just like any other chronic illness. I had no idea that it was something learned. This is going to make it so much easier to help those with schizophrenia, bipolar diosorder, and depression.

One of my friends asked me why I engage with these peoplem because I am not going to change their mind. In this particular case Brían deserves to know that there are people who support her. Some of us will stand up to those spewing hate who refuse to learn tolerance and acceptance. I really wish I had the energy these people expend hating others because of their gender and/or sexuality. My disabled ass would be able to accomplish so much and maybe my homework would get done in a timely manner. Just sayin’.