I have an issue. Maybe “I take issue with a thing” might be better wording. I mean, I have a lot of issues…

A while back I read a few articles about the pandemic, book sales, and how Barnes and Noble has changed how they market and display books. What is carried and put out on the display tables is now decided by each individual store based on…stuff. Everything from demographics, what has sold previously at individual stores, what is selling on social media, the phase of the moon, if the manager likes a book cover…you get the idea. Actually, I made up those last two. There is no evidence that either of those two things have any bearing on what a store displays or carries.

In theory, this all makes sense. On paper it looks good. There are a minimum of 500,000 books released a year. A bookstore can’t carry them all. It’s impossible. It makes sense they carry what is going to sale. However, and this is just my opinion – I’m an English major, what do I know? – Barnes and Noble, and maybe other bookstores, are relying a little too much on what is popular on social media.

Today, The World We Make by N.K. Jemisin was released. I debated preordering it but decided I would go into the bookstore today and pick it up where I wasn’t stalking the mail carrier. I’m sure he appreciates that. He is much bigger and a hell of a lot more buff than me. If I got rowdy, he could take me easily. Even though he’s in no physical danger from me, it’s still creepy to stalk your mail carrier. Also, Barnes and Noble has been hyping the book. 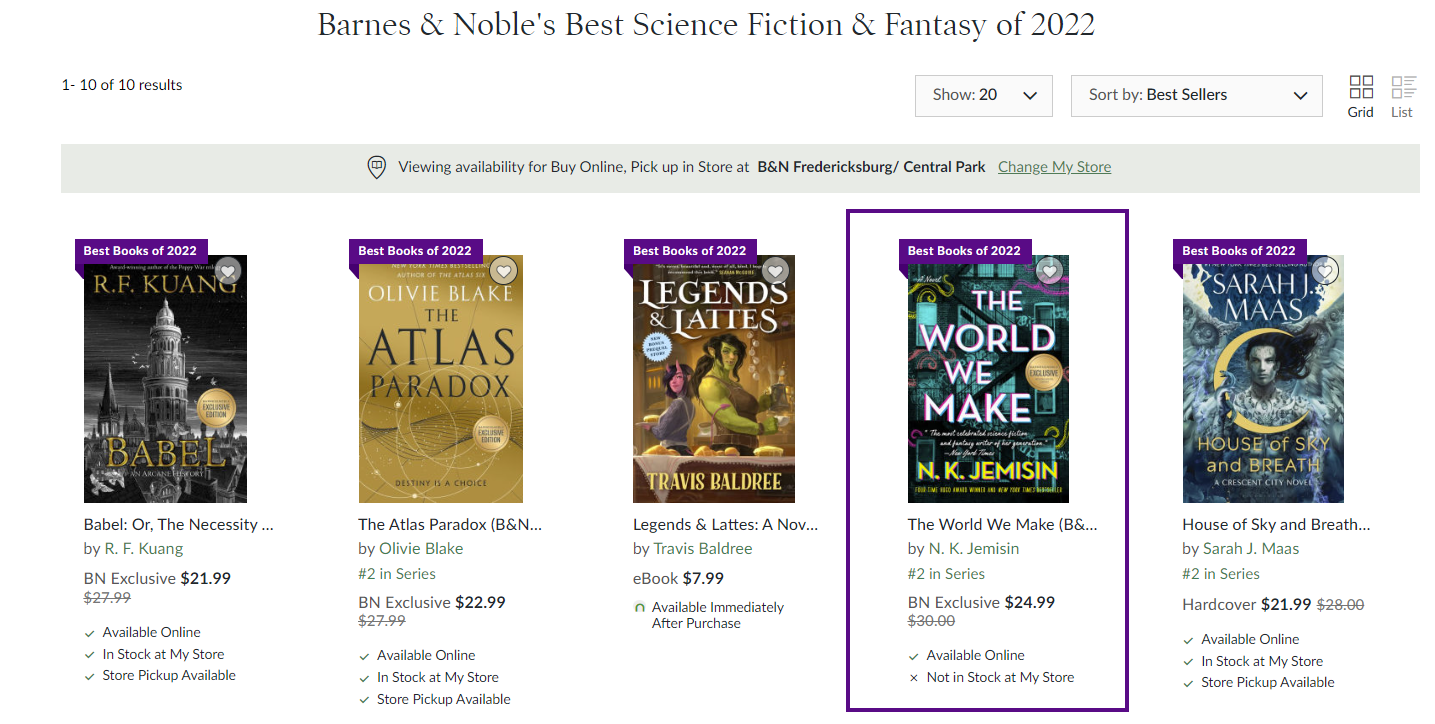 They are claiming it is one of the BEST Science Fiction/Fantasy books of the year. Logic dictates they will have it in store on release day.

They didn’t have it.

You know what they did have? 150 copies of the new Colleen Hoover book and two BookTok display tables with brand new larger stacks of the same books that have been there for the last 11 months.

I did what I did when I went looking for Glitterati on release day. I headed over to Books-a-Million to see if they had it. Also like Glitterati, I had to ask someone where it was. It wasn’t out with the new releases because they only received one copy and it was shelved with the other N.K. Jemisin books. It’s my copy now.

I probably should have been a little more patient and ordered a signed copy, but I wanted to start reading it today.

Is there something I am missing? Am I just not appreciative of social media driving book sales? I mean, I think it’s great that there have been books rediscovered that are once again on the New York Times Best Seller lists. I appreciate the fact some lesser known books have been found and given the attention they deserve. However, I would be interested to know if Barnes and Noble, or any other bookseller, are still selling enough copies of Crescent City a day, two years after release, that there is justification to have no less than five copies on display at all times? I’m pretty sure at this point, all Sarah J. Maas have a copy of the book and most of the people who want to read it already have it or have checked it out of the library or borrowed it from someone. I’m not hating on Maas. I just think her books have been displayed long enough and something else should take it’s place. That doesn’t mean make room for It Starts With Us. Let me make that clear. There are more than enough copies out.

I’m tired of going into the bookstore – and no, I don’t have an indie bookstore near me – and seeing the same books on display and having the same choice to pick from month after month. I also think if a bookstore is going to market a book as one of the best of the year in it’s genre, they should have it on release day. It’s almost as if the only demographic they are catering to is those on social media. It was cool initially when bookstores started spotlighting whatever was big on BookTok or BookTube or Bookstagram. Now it seems as if those are the only books they care about.

This isn’t working for me. I seriously hate having to keep up with what is coming out when and then ordering them site unseen. Returning something you’ve ordered through the mail is a pain. Gone are the days of browsing a bookstore to find something new and interesting. The bookstore experience, unless you are lucky enough to have an indie store nearby, is gone. I miss it. Is there anyway we can find a happy medium? Please?! At the very least, have the books in stock you are hyping and you want people to buy.