The first rule of Fight Club is you don’t talk about…screw it. I’m going to talk about Fight Club. I actually talk about it a lot. I wrote two different papers on the book for two different classes. The first paper was a final paper for one of my literature classes. I focused on mental illness and repressed sexuality. The second was for my Women and Gender Studies class and body image. Society talks a lot about female body image, but little in regard to men. If I ever feel the need to write a third paper, I may need to get a second copy of the book. I am not sure the copy I have has any room left for annotations. 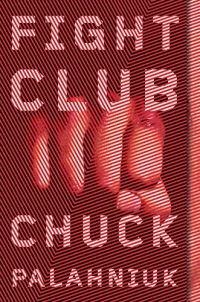 Fight Club, by Chuck Palahniuk, is probably the most misinterpreted books/movies ever released. It was commentary on consumer culture, masculinity as a whole, male body image, and mental illness. Meanwhile, incels took Fight Club literally. They worshiped Tyler Durden. He became their hero. Tyler is the ultimate alpha male. He does what he wants and no one can stop him. Fight Club quickly turned into an instruction manual on how to be an alpha male.

Not long after Fight Club initially appeared on cable, an internet friend at the time asked what I thought of it. I had to tell her I hadn’t watched it. In fact, I didn’t even know the movie existed. I was told what channel it was currently on. I sat down and watched it that night. Somewhere in either the opening or closing credits the audience is told it is based on a book by Chuck Palahniuk. The next day I was at Barnes and Noble buying the novel. I read it in one sitting. I have stated several times on this site that my MA concentration is in cultural studies through literature. Fight Club is the epitome of commentary on culture and society.

When Palahniuk wrote Fight Club, he wasn’t yet out of the closet. He wrote the book as a closeted gay man looking at society. The unnamed narrator represents the every man while Tyler Durden represents everything society wants men to be. The irony of Brad Pitt playing Durden in the movie has been lost on many. There is a brilliant scene in the movie that does not appear in the book. 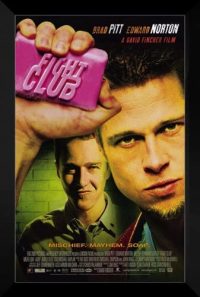 There is a section of the book that was left out of the movie that I wish had been kept. In it the reader learns that the soap was originally made from the lipo-suctioned fat of Marla’s mother that she was sending to Marla for collagen injections. This scene showcases the extent of Tyler’s depravity, how Marla is being manipulated and used in every possible way, and just how powerless the nameless narrator is to do anything about it. It’s the nice guy watching the girl he’s interested in being used and abused by “bad boys” never getting the girl.

My opinion is the movie adaptation is one of the few that did not ruin the book. I don’t know if I feel this way because I watched the movie first (something I almost never do), but I would like to think David Fletcher is just that good at his job. Maybe he actually read the source material. Honestly, I feel that the movie and novel complement each other well, that one needs to experience both for the full experience. They each contain things the other does not, but are relevant to the other.

This could be the source of my Fight Club fascination. It could also be that the book/movie is deeper than it appears. You have to pay attention and think about what is going on to fully understand the work and appreciate the nuance that went into it. I highly recommend, if you haven’t, reading the book then watching the movie….or watch the movie then read the book. Your choice. Either works. Both options will give the full Fight Club experience.