The Book was Better: Dune Edition

I read Frank Herbert’s Dune for the first time in 4th grade. 9 year old me didn’t understand the book, found it boring, and I hated it. 9 year old me didn’t understand what was going on in Ursula K Le Guinn’s The Left Hand of Darkness either. Her alien biology worked the way they did because they were aliens, at least in my mind. There was no way I knew the book was a thought experiment on gender. This brings up the topic of age appropriate reading and book banning culture, I suppose.

As a child growing up in the 1970’s and 1980’s I did not have access to the wide world of young adult literature there is now. There was some out there, but it wasn’t a popular genre. I was also an avid reader. Anything I could get my hands on was fair game and no one monitored what I was reading. My mother was a high school drop out, my step-father was uninterested, and my father was not in the picture. If he had been, I don’t think he would have told me I couldn’t read something. We met long after I became an adult and learned he was the same way. Books are meant to be read and you don’t hurt book spines.

My reading level, as determined by the famous fill in the dot with a number 2 pencil tests, was years above my age by about six years. Vocabulary was good. Comprehension was amazing. I enjoyed Encyclopedia Brown books but they weren’t challenging enough. I could read one in a half hour. Needless to say, “I don’t have anything to read” was equal parts mantra and complaint. So I moved on to books written for adults who had the life experience to understand the nuances of what was going on that 9 year old me lacked.

This brings me to Dune.

I refused to return to this book and reread it as an adult willingly. I was forced to for one of my science fiction literature classes. I understand it in ways that I did not as a child. I have a much better appreciation for it and now understand the commentary it was making on the world at the time. However, I am still not a huge fan of Frank Herbert’s writing style. I find it dry. Like Arrakis desert dry. There is an amazing and complex story going on that is one part science fiction opera and one part epic fantasy but it is slow reading. Trudging through the sands of Arrakis slow. Anyone that has ever tried to run in sand knows the challenge.

There have been three movie adaptations of Dune.

1. The David Lynch version from 1984 with Patrick Stewart playing Gurney. In retrospect, as amazing as Stewart is, this was a weird casting decision. Even weirder was Sting – yes, the lead singer of The Police – cast as Feyd. This picture says all that needs to be said: 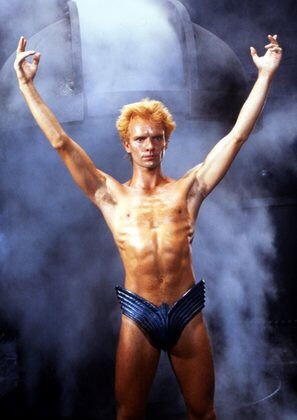 This movie was a victim of its time. I know there are diehard fans of this movie who will take issue with me saying that, but I stand by it. Dune was (and still is) an ambitious film. Special effects at the time were not advanced enough for what the movie needed. I felt like I was watching an episode of Space 1999. I loved that show growing up, but I do recognize that the effects were b-movie horrible and the space ships were flying brick bulky. Then there was the addition of the dogs. The dogs were so out of place. I know they were being used as a nobility motif, but it was still weird. The sandworms looked way to phallic. Now you will never be able to unsee that. You are welcome.

2. The 2000 miniseries with William Hurt. Children of Dune and Dune Messiah were miniseries sequels, as it were, to this. Alice Krige, AKA the Star Trek Borg Queen, played Lady Jessica in these. Children of Dune and Dune Messiah were much better than Dune in this adaptation. The effects were better but it was dumbed down in the way everything gets dumbed down for TV. There were things added for ‘dramatic effect’ that were unnecessary. In Children of Dune, the relationship between Leto and Ghanima, Paul’s twins, did not translate well. It was nearly incestuous. It was uncomfortable to watch. Oh, and process of Leto turning into a sandworm was expedited for effect.

3. The 2021 adaptation with Oscar Issacs, Jason Mamoa, Timothée Chalamet, Zendaya, and Dave Bautista. This film is beautiful and has an amazing soundtrack. Special effects have come a long way helping the movie so much. The sandworms finally looked like the force they were supposed to be. The ornithopters resembled the graceful bugs they were supposed to. Visually it was so much better. Lord Harkonnen was transformed from an obese and deviant BDSM club goer into someone truly corrupt (he’s still obese). I came away from it feeling like the entire production crew actually read the source material and took notes. I am both happy and sad it is being done in two parts. Sad, because I wanted to see the second half. Happy because this book has between 700 and 900 pages depending on the version (hardback, paperback, mass market paperback, etc.) and really needs to be done in two parts in order to do it justice.  Cramming that much content into 90 to 120 minutes means cutting out and condensing a lot of material.

The book was still better. The book will always be better. There is so much going on in Dune that can not be translated to film, at least not effectively. Unless one has read the books it is difficult to understand who the mentats are and what their purpose. One can not get the full understanding of the Bene Gesserit. They are referred to as ‘witches’ in the movies, but it is much more complicated than that. Then there are the Navigators. I don’t recall a full explanation being given in any of the adaptations. In short, a lot of subtext and details are lost in translation.

The 1985 version was made for fans of the book. The 2021 version was made to draw a new audience to Dune.  It has succeeded in doing that. The commentary Herbert was making on the world at the time is still relevant, maybe more so in some ways. I sincerely hope those who have only watched the movie will read the book. They will walk away with a better understanding and appreciation of the movie.