You are here: Home / Blog / My Brain when It Hears “Are Trans-Women Real Women?”

Author Chimamanda Ngozi Adichie is currently being raked over the coals for an essay she published on her website. She is being called a transphobe because she stated trans-women are trans-women. Now, I’m not here to agree or disagree with Adichie. I have yet to decide if I am a fan of her work, as I have only read Americanah and that was for one of my university English classes. However, I have been struggling with this comment because of the debate on if trans-women are real women.

I’ve never thought about it. I have always accepted everyone for who and what they are. Regardless of skin colour, sexuality, gender, religion, whatever, we are all human beings fumbling through life the best we can, making the most of what we are given. I think Depeche Mode said it best, “People are people.” Moving on…

Then I gave an interview in March 2017 in which I said that a trans woman is a trans woman, (the larger point of which was to say that we should be able to acknowledge difference while being fully inclusive, that in fact the whole premise of inclusiveness is difference.)

I understand that what she means is that trans-women, at least most of them, have gone through part of their life as a man and have experienced the privilege of being a man. They have not been marginalized their entire life for being female. At the same time she is accepting of them.

If anything, I have learned that everything is intersectional. For those that don’t know what “intersectional” means: the interconnected nature of social categorizations such as race, class, and gender as they apply to a given individual or group, regarded as creating overlapping and interdependent systems of discrimination or disadvantage. 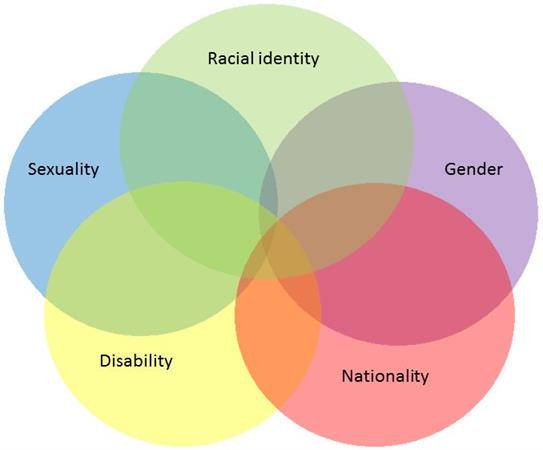 As a female I have to deal with misogyny and sexism. Women are constantly under pressure to have babies, as if our lives can’t be complete without them, we deal with catcalls, what other people thinks we should or should not do with our bodies, judgements on our sex life, comments about our appearance, I could go on. Black women experience all this plus racism. If they stick up for themselves, they are now labeled “angry black woman.” Lesbians experience all this with an extra layer of toxic masculinity where men either think that 1. she’s a lesbian because she hates men, or 2. she just hasn’t met the right man (and I am it), all the while they are getting off watching lesbian porn, because it’s hot.

This is where I am having my problem.

The argument, or at least one of them, is that trans-women aren’t “real” women because they can’t have children and they don’t have periods. There are a lot of women out there who can’t have children because of medical reasons, does that make them not “real” women? What about women who have had to have a hysterectomy because of medical issues? Why is womanhood defined by childbirth and periods? We are more than baby making machines.

Each person has their own definition and set of bullet points that define what it means to be a woman. That doesn’t change the fact that trans-women experience a lot of what biological women do from society. However, they experience bias because they are trans that I don’t. I am not going to get thrown out of a bathroom because I pee standing up. I am not going to get tossed out of a pool because my genitalia is visible in my swimsuit. Why are people looking at a strangers crotch anyway?

There is part of me that feels that saying trans-women are “real” women it erases the trans part of their existence and the bias along with the resulting trauma that goes with it. It’s kind of like when someone says “I don’t see colour,” while what they probably mean is they don’t judge people by the colour of their skin, it’s still problematic because they are refusing to see the racism in society and are not acknowledging that black people have a different lived experience than white people. Trans people, both men and women, have a different lived experience. Even in the porn industry trans people are treated as a fetish instead of something normal.

I almost forgot these “super straight” douche bros. They are claiming it’s not a sexuality but a preference. What it is, is transphobic and shallow. It’s along the lines of “I only dates blondes” or “I don’t date girls with tattoos.” The only reason they don’t want to date a trans-woman is because they are afraid a penis might be involved and they are afraid their friends will call them gay. They live in fear their Toxic Man Card will be taken away.

But this debate of “are trans-women real women” is even happening among women. The upside it’s allowed us to see who is really a transphobic TERF  (looking at you JK). I don’t understand the obsession with the sexuality and gender identity of others, especially total strangers. If someone says they are woman, then they are a woman, and should be treated as such, minus the misogyny and sexism (none of us should have to put up with that).

There is an interesting opinion piece in the New York Times about trans-women and gender performance. Yes, gender is a social construct. Society – and by society I mean men – decided that “woman things” include cleaning house, making dinner, childcare, and every other stereotypical thing that is assigned to them. Originally women were seen as the property of men, first their fathers, and then their husbands, and therefor had to do what they were told.

We are all guilty of gender performance. Gender performance is doing all those things that society has accepted as belonging to one gender or the other. For women it’s wearing skirts or dresses, having perfectly manicured nails at all times, wearing heals, putting on make up, and overall just trying to live up to unrealistic beauty standards. Women do all these things to attract the male gaze. We are indoctrinated from an early age to believe if we don’t do these things (or learn to cook and keep house) we will never find a husband. Trans-women do all these things as well because it’s what society tells us as women, we must do. It’s a performance we are required to put on, rather than just be ourselves. When we do this, we are affirming that this is what women do and how women look. If we go out in public without make up and in sweats we run the risk of being told – by a man – we would be pretty if we put on make up and dressed nice. Personally, I’m over it.

Body dysmorphia is a real thing, Some of us have it because we are bombarded with women like the Kardashians, or Victoria Secret Angles (so glad they have gotten rid of them) and we know we will never look like that no matter how much we try. Others experience it because they are in the wrong body. Body dysmorphia causes eating disorders and people to commit suicide. It took me a long time to become comfortable in my skin because of all the mixed signals I got from my family. My grandmother was hell bent into turning me into a “proper young lady” meanwhile the other side of my family (and my mother) reminded me at every turn that I was inferior because I was not born a boy. I just wanted to be left alone to do my own thing and be a human being. Everyone around me was more concerned with my gender than I was.

Is it really so hard to let people be who they want and need to be, regardless of what that is, as long as they are a good person? Why is it up for debate? You can be a white woman, a cis woman, a black woman, a disabled woman, a gay woman, a Jewish woman, , a trans-woman, or any combination thereof. You are still a woman. Everything else is just an adjective to put you in a box that labels your lived experience. Sadly, that box is also used to by people to pick who they are going to discriminate against.

I accept trans-women as women, but I also don’t want to diminish their struggles and experiences as a transgendered person either. But calling them ‘trans-woman’ is segregating and puts them in a special box, and I don’t want to do that either. Maybe I am just overthinking this.