You are here: Home / Blog / Fatphobia

I’ve had a hard time writing this post. I’ve written and edited and written some more and then finally deleted it to start over.

The plus size clothing company Torrid is having a model search and the general public gets to vote on the models. While sitting in the waiting room of the surgeons office today I pulled up the email for the voting link. After voting I started looking through more of the Instagram pages of the finalists.

One of the finalists is a body positive advocate who wants to not only normalize fatness, but embrace it. This is a noble idea but I found myself not liking how she was going about it. Her bikini and underwear pictures I feel distracts from the points she is trying to make. People are going to be more focused on how she looks and judging her rather than listening to what she has to say.

It appears that judgement from others has given her a bit of an attitude problem. I have a total attitude problem and the filter between my mouth and brain doesn’t work, so I’m not judging. My best friend has put in years trying to get me to be more diplomatic. There has been some success but it is too hard to be certain. If you are going to put yourself out there on social media with scantly clad photos, you are opening yourself up for judgement. It’s just the way of social media. Some of her statements such as “Fatphobia is racist” and “fatphobia is ableist” without backing these statements up I take issues with. When someone asks her to explain and she goes off about how after someone has read such and such book to come back then talk to her, it’s problematic. If you are going to be an advocate for something, you have to educate about what you are advocating for.

Obviously, the topic of the day is fatphobia. First I want to address two things this Instagram person has said.

The idea that fatphobia is racist. I understand where she is coming from on this, but I am not sure I totally buy it. I could be convinced. I’ll probably end up doing research on this just for the simple fact that racism is embedded in so many things in the United States and I honestly wouldn’t be surprised. However, I need more than someone’s word on it. I need the studies and research to back it up. I am sure that there is an argument to be made based on beauty standards. Applying white beauty standards to everyone really needs to stop. This is why Black people try bleach their skin and straighten their hair. White beauty standards are the seen as the norm. That needs to stop. I keep thinking about Sara Baartman, who was totally sexualized. At any rate, she was asked for some of the works cited for the paper she wrote on this and refused to provide them. Not cool.

Fatphobia is ableist. People are being discriminatory because of your weight, not your potential health problems, not because you have a noticeable disability. Ableism is the discrimination against disabled people. If you are solely being discriminated against because of your weight that is fatphobia. I get that people just assume that you have a health issue, but again, that isn’t ableism. The term ableism implies that an oversight body isn’t able-bodied, that there is something wrong with it. This seriously makes no sense to me.

And now for my own tangents.

I cringe every time I see someone say something like, “I am genuinely concerned about your health because of your weight.”

There there is the word fatphobia. Just like I have a problem with the word Islamophobia. These aren’t true phobias. Phobias are extreme or irrational fears of something. They can be debilitating. Phobias are things like a fear of spiders or a fear of crowds or a fear of heights. No one is afraid of fat people, people are afraid of looking like the fat person. These are two different ideas. Fatphobia and Islamophobia are names for certain types of discrimination. “You can’t sit next to me on the bus because you are fat/Islamic” is just being a discriminatory asshole.

No mater what someone’s weight, others make assumptions. You eat too much/a lot of junk food or you don’t eat enough. You are lazy or you must work out a lot. You are either healthy or unhealthy. Assumptions are nothing more than a snap decision that someone has made without any facts or information and it makes whoever made them look like an asshole. Assumptions lead to stereotypes and stereotypes, even positive ones, are harmful.

I’m all for body positivity and being comfortable in your own skin no matter what you look like. We need the body positivity movement as part of fighting eating disorders like anorexia. In high school I knew a girl who wanted to loose 5 pounds just for a bikini. When we returned to school the following year she had lost so much weight she was unhealthy. The flip side is the body positivity movement could lead to eating disorders on the other end of the spectrum where people think it’s okay that they are gaining weight because of an unhealthy lifestyle. We eat when under stress because the body needs the extra energy. When something is going on that is out of our control we eat because we can control what goes into our bodies.

If your diet is making you sick, if you are unhappy with how you look and want to loose weight, that is between you and your doctor. Random people on the internet have no business getting involved unless their opinion has been asked for. Fat shaming, not matter what the reason, is a type of bullying and people really need to mind their own business.

As an aside, here is an awesome article from the Huffington Post that talks about fatphobia better than I have.

As another aside….I have no nice words about PETA so I just won’t. I can promise you that you can be a vegetarian and still be fat. Seriously. 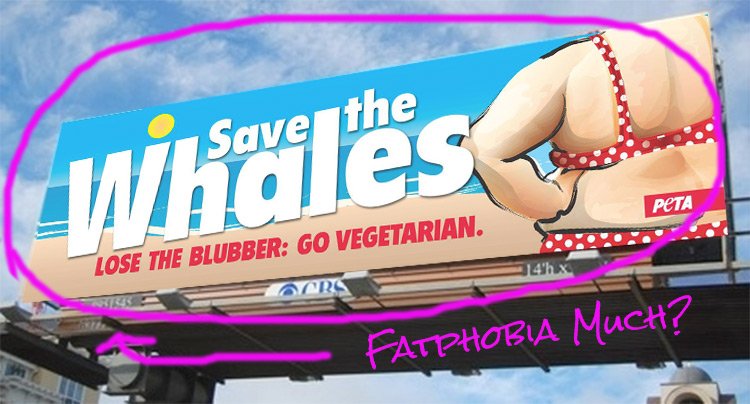