You are here: Home / book review / The Magic Toyshop 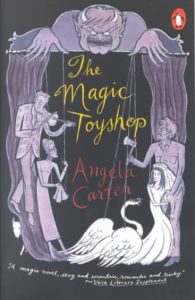 My spring 2020 university semester we read a book of fairy tales by Angela Carter, The Bloody Chamber, and I loved this book so much I put The Magic Toyshop, along with a number of Carter’s other books on my to be read list. Angela Carter was one of the greatest feminist writers of the 1960’s and 1970’s. In The Magic Toyshop she combines that feminism with Gothic literature into a remarkable book that explores the first ideas that she would later develop in The Sadeian Woman, a look at the Marque de Sade and female sexuality. This semester in Contemporary British Literature the first book we read, much to my excitement, was The Magic Toyshop.

I love this book. I could be described as a Gothic coming of age tale.

At the start of the book, the main character, Melanie, finds herself looking at a picture of her parents wedding and wondering about her Uncle Philip because he looked so out of place in that photo. She would soon find out what he was like first hand by being sent to live in a surreal and horrific world dominated by the patriarchal Uncle Philip. Nothing could have prepared for her what he was really like, not even the wedding photo. Once she and her siblings go to live with Uncle Philip, nothing and no one is entirely as they seem.

I hate it when the backs of books and write ups on website say vague things like “leaves [the character] questioning their entire world” and I just did it. However, Melanie does actively question things like class and sexuality and what has become of her life and how her extended family fits into her life.

The book was later turned into a movie. I watched parts of the movie and it is much different than the book. The movie relies on special effects to show the “magic” that is implied in the title. The book does a much better job of blending reality and quite possibly PTSD with that space where reality and art meet. That place takes place in the mind and isn’t communicated properly through the film. I bring this up because there are those people out there who are familiar with the movie. The book is so much better. The book is always better than the movie.

If you haven’t checked out Angela Carter, I highly recommend her. I place her up there with the likes of Neil Gaiman as an author who creates remarkable stories with complex characters. In short, The Magic Toyshop is a must read.