You are here: Home / Blog / There is Nothing Edgy About a 50-Something White Guy

I can’t believe I actually typed that, but seriously, there is nothing edgy about a 50-something why guy. Once you are over a certain age there should be a law written in stone that you are not allowed to try and be edgy. It’s just painful to watch and the person always comes across as an asshole.

I received a text message that a co-worker of a family member had the “Wuhan Flu” My first response was not concern that someone in my house may have been exposed or how said person was doing. It was “Quit being an ass.”

Sometime around lockdown I had a conversation with this same person about why it’s offensive to call Covid-19 the Wuhan Flu and I got back, “Well, that’s where it was discovered, and other diseases are named after where they were discovered so I’m going to call it the Wuhan Flu.”

This isn’t Rocky Mountain Spotted Fever we are talking about. There has been a ton of discrimination against Chinese people (and people who look Chinese) because of racist rhetoric of the past presidential administration in regard to Covid-19. Explaining this I was met with “That’s messed up.” Yes, yes, it is, and calling Covid-19 the Wuhan Flu is equally messed up and doesn’t help the situation.

But it was discovered in Wuhan, China so it’s okay based on names like The Spanish Flu and Rocky Mountain Spotted Fever.

Give me a break. This is not an explanation or excuse to say something that is … well, racist. I was going to say borderline racist, but it’s definitely racist and ignorant.

I also had to explain to this person that there was not going to be a microchip tracking device added to the Covid-19 vaccine by Bill Gates and Microsoft because this person can not tell the difference between real news and fake news with all its conspiracy theories. He also can’t be bothered to look things up and verify them. That always falls to me in order to fight stupidity. If I were a superhero, I feel like that would be my fight, to end stupid. It would be a never-ending job. At least Batman had time off.

After being told about the co-worker the realization hit me that he is just really trying to be edgy and cool. Maybe this thing is accepted with his other white male friends because they are white and male and think this kind of thing is edgy or something. I don’t know. I don’t really know what goes on in the mind of white guys and when you put enough of them together, they all have their dude bro moments. 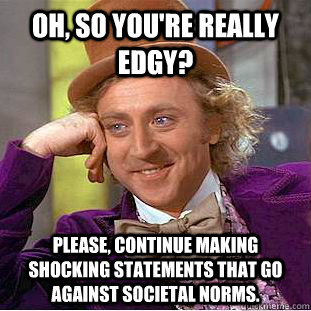