You are here: Home / book review / The Farming of Bones 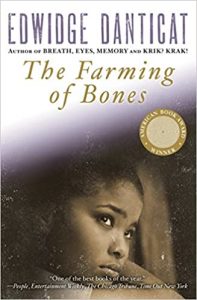 Edwidge Danticat stated in an interview that the idea came to her while researching the Parsley Massacre. She happend across a story about a Hatian servant working for a Dominican family with military ties. When Trujillo gave the order, the male head of the family killed the servant on the spot at the dinner table to prove his loyality to the government and Trujillo. Danticat’s question was “What if that servant had lived?”

Amabelle became that servant, and Farming of the Bones the story. Her world is turned upside down as Trujillo’s orders are carried out. She is able to escape to Haiti, but leaves behind her adopted Dominican family. Many of her friends, including her fiance, are killed. She is left with nothing but traumatic memories.

Farming of the Bones is hard to put to down once you start reading it. Danticat is a remarkable storyteller. She stays true to the historical backdrop and the tumultuous relationship between Haiti and the Dominican Republic while weaving the fictional story of a woman who lived through it. The reader is able to feel Amabelle’s loss and pain right long with her. Stories like this make sure history isn’t swept under the rug and forgotten about.