You are here: Home / book review / Feeding the Ghosts 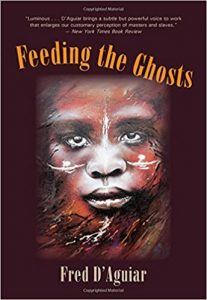 In November 1781 more than 130 Africans were thrown overboard in what was to become known as the Zong Massacre, named after the slave ship the Zong. This isn’t an event that any of us learned about in history class. Hell, we were lucky if slavery got more than a brief mention. The truth is, horrible things happend to people on the Middle Passage. Fred D’Aguiar used this event as the backdrop to Feeding the Ghosts.

Somewhere on the net there is someone calling the book revisionist history. At no point has D’Aguiar called this book anything but fiction, despite being based on a true story. His artistic licence calls attention to the slave trade, which wiped out entire African villages in the name of capitalism. It calls attention the deplorable conditions that the Africans endured on these voyages and how they were considered cargo and not human. It brings to light how even an educated African, who grew up in a mission, who could read and write and was baptized, was still considered far below those of white society. It highlights the cruel white patriarchy of the time and the atrocities that were commited in the name of colonization.

This isn’t one of those books that I would have picked on my own to read. It is also not the kind of book that would get national attention at it’s release like say something by Stephan King, Cliver Cussler, or Danielle Steel. This is why I appreciate the literature classes that I take at university. I am introduced to writers and genres that I wouldn’t normally find or pick out on my own. In light of current events, especially the trial of the police officers that shot Breonna Taylor, this book is more relevant now than when it was released in 1997. D’Aguiar is a poet first and a novelist second. This is reflected in his writing style with vivid descriptions that transport the reader to the time and place he is writing about. Feeding the Ghosts is an excellent book, even if the story itself is inspired by a depressing moment in history. It is the kind of historical fiction that inspires one to look into the events surrounding it, which is what D’Aguiar was hoping for.