You are here: Home / book review / Consider This by Chuck Palanuik 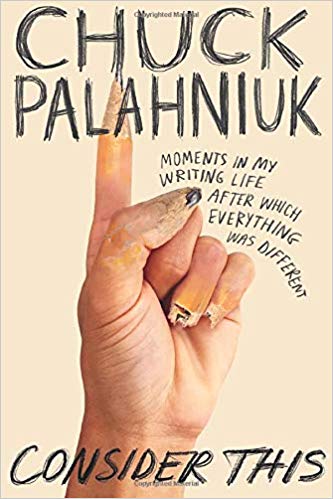 I was just had a bit of a laugh. Over on Lit Reactor there are 36 Essays on Writing written by Chuck Palahniuk. They can be accessed for $9 a month or $45 for 6 months. Consider This: Moments in My Writing Life After Which Everything was Different is about half that, even less if you buy it as an e-book. Those Lit Reactor essays are floating around the net as a PDF and have been reviewed on Goodreads. The information in those essays and the information in this book are the same, more or less. Many of the essays have been expanded, and Palahnuik adds some stories from the road. There is nothing like a good road story. Given the choice between paid content on the web that access to is “rented” and purchases a book that I can highlight in, annotate, and keep forever, I know which choice I am making. Just sayin’.

Consider This was on my Amazon wish list long before it was released. I waited less than patiently because Chuck Palahniuk had written down everything that he learned about writing and I wanted to learn everything that I could from him. Now, if only Neil Gaiman would write the same kind of book. I’ve read books about writing from other authors, such as On Writing by Stephan King and Zen in the Art of Writing by Ray Bradbury. I think I still have both these in my bookcase. There are some others. What sets Consider This apart from these other books is that it stayed with me. I’ve not forgotten what Palahniuk had to say. It’s just not because Palahniuk is on my favourite author list. King was there for a long time and I’ve read at least half of what he’s written. I lost interest around The Watchtower series, which my dad loved. I also love Bradbury. One of my favourite short stories of all time is written by Bradbury, “There Will Come Soft Rains”. Palahniuk’s book is more conversational, as if he is talking to you, where other books have read like a writing manual.

Palahniuk is a minimalist writer. This is quite different than most popular authors. In writing classes we are taught to describe things, to let the reader know how you, the writer, is envisioning the setting. Adjectives are used freely to describe things. Minimalism is the opposite of that. That is what Consider This teaches, and writing like this is a hard skill. I do think it’s a skill that writers should learn, not necessarily master. In my mind it works as “say what you are going to say, then go back and dress it up.” This doesn’t mean that someone who doesn’t want to learn minimalmist writing can’t take anything away from the book. There is a lot of good information in here, and it’s explained in a non-technical way with clear examples that sometimes make the book auto-biographical.

Remember those road stories I mentioned earlier? Littered through the book are the writer equivalent of musician road stories. A lot of interesting things have happened to Palahniuk while doing book signings, mostly because he’s Chuck Palahniuk and the writer of Fight Club, and he shares some of the more interesting stories, like the time his fake arms were scattered all over the road. I would so buy a book of just Palahniuk road stories. These stories also work as good examples of how to write essays. In short, this book is both informative and entertaining.

I am not going to say this is an ultimate writing bible but it is a valuable book that should have a place on every aspiring writers bookshelf, especially if you are a fan of Fight Club and want to write a book that reads the same way.