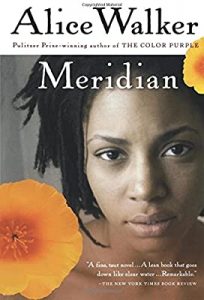 Warning: This post contains some spoilers about the book Meridian by Alice Walker.

I wonder how many students rely heavily on things like SparkNotes or Cliff’s Notes or the like. I also wonder how those students pass, if they pass.

I am currently reading Meridian by Alice Walker for my university class Black Women Writers. While looking up to verify the time period that the book takes place I came across this on the SparkNotes website:

Meridian is plagued by a mysterious inherited illness, much like epilepsy, which parallels and triggers her spiritual and physical transformation. The sickness renders her unconscious, episodes she refers to as “falling down,” and it subjects her to paralysis, blindness, and hair loss. On one hand, the condition connects her directly with her father and great-grandmother, who suffered the same burden.

Meridian’s illness is not “inherited” from her grandmother or father. First, little is said about her grandmother other than “[Feather May was] a woman it was said of some slight and harmless madness” (Walker 50). The book goes on to talk about a spiritual event that happened at the Serpent Mound. There is nothing that says she lost her hair or would blackout/faint/”fall down” as Meridian called it. Secondly, there is not any ailment of her father ever mentioned. Any “connection” was spiritual.

On the other hand, Meridian suffered from postpartum depression after her son was born. Once she joined the Civil Rights Movement she was beaten by the police, one time knocked unconscious and later developed PTSD. It’s mentioned on page 80 that all the civil rights activists suffer from battle fatigue, something similar to PTSD only short lived. In Meridian’s case it escalated to PTSD. It isn’t until after years of sexual harassment, racial discrimination, the birth of her son and the subsequent depression, giving up her son, a later abortion, and being abused by police that she starts to suffer hair loss, her body becoming frail, and later “falling down”. She suffered her affliction as a kind of martyrdom, a penance for the guilt she felt. None of this had anything to do with her grandmother or father.

How is it that I, someone who can breeze through a book in a day, can pick this up and piece two and two together and someone who is being paid to go over the book with a fine tooth comb and create study notes can not? Do these companies not screen people for reading comprehension before hiring them?

This isn’t one of those “death of the author and everyone has a different interpretation of what they read.” This is blatant ignoring of context clues.